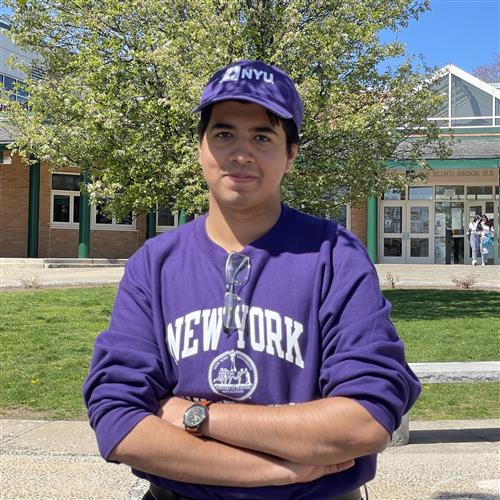 Most awards are renewable for up to four years of college undergraduate study and provide annual stipends that range from $1,000 to $10,000 per year.

“It’s an honor and it’s a privilege, and I also understand that it’s a reflection on the school and the brilliant education that happens here,” Raghav said recently.

Wearing an NYU hat and shirt, he talked about his plan to attend college there in the fall and said the scholarship support is welcome.

He’ll attend the Gallatin School of Individualized Study at New York University. There he will be able to create his own major, combining his interests in studying political science, law, economics and Asian American Studies, integrating them with research and practical work.

His travels in life have spurred his interests in politics, foreign policy and the advocacy work that he already pursues during his free time.

Raghav came to Blind Brook as an eighth grader in 2017, after his family relocated from Dubai. The U.S. is his sixth country of residence, he said. While he previously attended private schools, he said the environment and focus on the individual student that he found here is very comparable.

“I do appreciate that it's a very high rigor of curriculum that you can take. They want you to challenge yourself, and I did challenge myself,” he said.

National Merit Scholarship qualification begins with the Preliminary SAT/National Merit Scholarship Qualifying Test. Advancement in the competition entails an extensive application and essay detailing extracurricular activities, awards, and leadership positions. Academic record, recommendation by a high school official, and consideration of subsequent SAT or ACT scores are also part of the process. In all, 7,500 finalists will be awarded scholarships totaling nearly $28 million.

"We congratulate Raghav on his accomplishment,” Blind Brook Principal Dr. Jennifer Chirles said. “Raghav has been a wonderful contributor to our school community, serving on the District Strategic Planning committee as well as a hiring committee for the district.”

Raghav’s personal interests include pursuing his private pilot’s license at Westchester Airport. A musician, he plays the piano and the French horn.

He said he appreciates the education he has received at Blind Brook High School and would advise younger students not to miss out on all that the school has to offer.