Parent Anna Romanella knows what so many other parents already know—their child or children are on their phones all. the. time. She has just as many concerns as her fellow parents do, including how to keep their kids safe while using their devices?

“We know kids are on social media, that’s how they socialize,” said Ms. Romanella, a parent of a seventh and ninth grader. “Kids spend more time online talking to their friends than they do talking to them in person.”

It was one of the reasons she attended a discussion by Assistant District Attorney Laura Forbes at Blind Brook Middle School that focused on internet security and offered tips on what parents can do to prevent such issues from happening to their child. 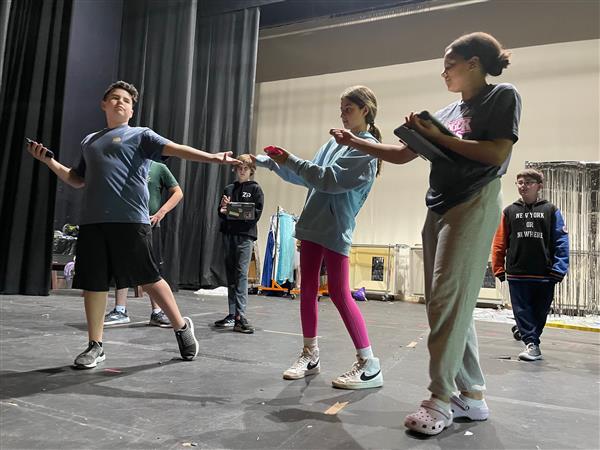 Ultimately, Ms. Forbes said, it comes down to communication.

“I know it’s awful and awkward, but you talk to your kids about drinking and driving, dating violence, stranger danger, you have to talk to them about online safety.”

Early in her career, when she first came to the Cyber Crime Bureau, she would have told parents to simply keep your child off the internet. Now, of course, that is impossible, but there are ways to keep them safe in an online setting.

It’s too easy for a child to become a victim or a target. They may think they know who they are interacting with online, but that is not always the case. Children can also be very open and easily accept the information they are given, that the person on the other end is really a teen like them with similar interests.

“I like to talk to kids about context,” Ms. Forbes said, adding that when in person facial expressions and body language convey meaning that can easily be interpreted. That it not possible to notice online.

“It doesn’t matter if you put a smiley face emoji with it,” she said of sending an offensive message. “If you won’t say something to their face, don’t put it online.”

There are so many ways the internet can be used for good, and unfortunately, the reality is, it can also be used for bad. From stalking someone, to constant harassment to making threats.

“Columbine changed everything,” she said referring to the 1999 school shooting at a high school in Colorado. “We take threats seriously.”

Her office is also seeing more swatting issues, which occurs when someone online is talking to someone else who can access their personal information.

The most difficult thing for children and even parents to understand that it can be difficult to know who a child is talking to online.

“You would not put your child on a train and send them to Time Square, why would you let them just ‘go’ online,” Ms. Forbes asked. “You have to talk about this.”

Knowing who is on the other end of the online conversation is paramount to protecting children. It is too easy for someone to create a false identity online.

Ms. Forbes also reminded parents of the trending TikTok challenges that have recently made headlines, when children are bombarded with dangerous, and often illegal tasks and record it for entertainment. She mentioned the Devious Kicks challenge, when people were told to destroy school bathrooms and the Slap-A-Teacher.

“I ask kids why is this funny to you,” Ms. Forbes said. “At the least it destroys property, at the most it desensitizes.”

Finally, there is the awful way in which children are sexually harassed online. They may be coerced into sending someone suggestive photos or videos which could lead to extortion if they don’t comply or persuaded into a potential in-person meeting with an online predator.

“Even without physical sexual contact it is a crime in New York,” Ms. Forbes said.

“It’s becoming an epidemic,” she said. “It’s happening here in Rye Brook, in New York, in the United States. You have to talk to your children.”

As difficult as it is to learn about the nefarious side of the internet, there are things parents can do to protect their children.

In addition to talking to their kids, Ms. Forbes, also suggested parents pay attention to any behavioral changes with their child, which could be an indication that something is not right, and they may be afraid to tell an adult.

Also, parents should not be afraid to go through their child’s device and learn what apps they have downloaded to their phone.

“Children do not have a Constitutional right to have a smartphone,” Ms. Forbes said. “They have a right to a safe and stable environment, to be loved and cared for by their families.”

Parents should learn who their children follow and who is following them on social media sites, and parents should follow their child on social media (although Ms. Forbes suggested not commenting on their posts!). And parents can also be the keeper of passwords, including the WiFi in their home or the App Store, thus preventing a child from accessing the internet or dangerous apps.

In addition to talking to their child, Ms. Forbes encouraged parents to talk to each other about what they have done in the past or what suggestions they have and to help one another navigate these very serious issues together.

In the coming weeks Ms. Forbes will be talking to students sharing a similar message in an age-appropriate terms. In her mind, she said, it is never too early for children to begin learning how they can keep themselves safe while online.