Lion? Tiger? Ox? All good guesses, but students at the Bruno M. Ponterio Ridge Street School learned that 2023 is the Year of the Rabbit!

The information was presented to them during an assembly celebrating the Lunar New Year. Students, dressed in traditional clothing, took turns sharing how the new year is celebrated. The students were also joined by members of the Chinatown Community Young Lions, who demonstrated a tiger dance. 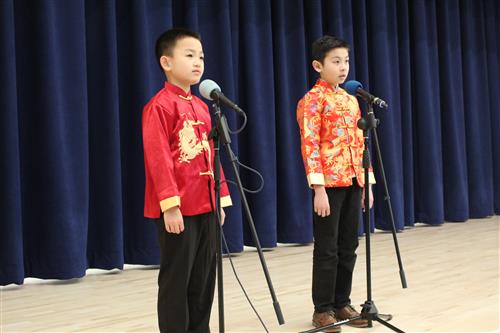 Third grader Jason Z. explained how the traditional new year celebrations began in China. He told the story of a monster who would come to a village and frighten its inhabitants each year. One year, there was a traveler passing through who suggested the villagers find ways to frighten the monster away. They did so by hanging red lanterns outside and setting off fireworks.

“They never saw the monster again,” he said, adding that the tradition of wearing red and using fireworks to celebrate the new year continues to this day.

Brandon W., who is in the fifth grade, said the new year is “a time to meet with family and get red envelopes filled with money.”

“I also like to eat dumplings,” noted Ivyn S., also in fifth grade, as to what he enjoys most when his family celebrates the holiday. 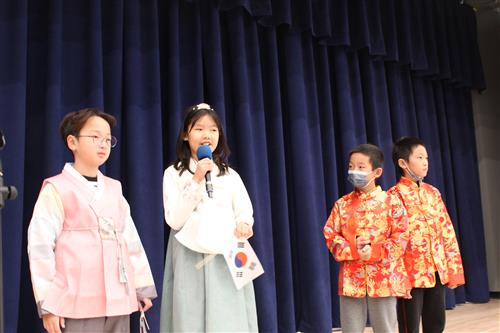 Families in other Asian countries also celebrate the Lunar New Year. As one student explained, in Korea they eat rice soup and pay their respect to their elder family members by kneeling in front of them.

Madison W. had the honor of introducing the Lion Dance to those assembled in the cafetorium.

Before students realized what was happening, the curtains on the stage parted and a purple, white and pink lion appeared. It moved its head up and down and its body around the stage before heading out to the audience. As drums and cymbals played, the lion made its way through the seats, pausing sometimes to shake its big head at students and teachers much to the delight of the children in the audience.

When the lion returned to the stage Principal Tracy Taylor held up a head of lettuce and the purple lion gingery took it from her. Moments later the lettuce was spit out and green leaves were strewn about, as students who witnessed the interaction laughed at the sight. 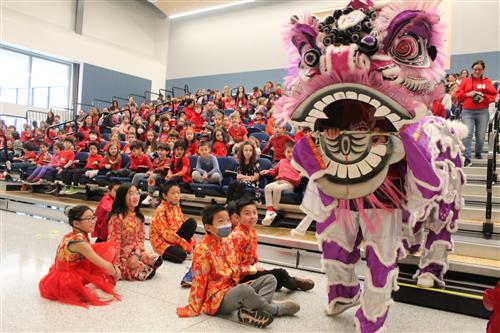 The lion was not being disrespectful. Rather, it is a tradition for the beast to throw it back.

“Having the lion throw it back to you is a symbol of luck and wealth,” explained Kyle Lew, a member of the Chinatown Community Young Lions. The character is so large that one person oversees moving its head, which weights 30 pounds, while another supports its back.

The lion, Mr. Lew assured, does not eat anyone.

“We are here to have fun,” he said. “We want to share our culture and holiday.”